A Maker space refers to people coming together to create and share resources, knowledge, and “stuff.” There are a number of freestanding and school-based Maker spaces nationwide, and several forward-thinking libraries have started developing them for their communities.

One of my educational philosophical principles is to make education fun.  I believe that Maker Space will be a useful tool in making education fun because Maker Spaces promote learning through play and have the potential to make the content of science, math and technology more clearer to the students.  This can also be integrated to the K-12 curriculum to make students more engaged and interested in learning. In the article The Makings of Maker Spaces Lauren Britton presented how Maker Spaces give children the opportunity to explore their thoughts and talents. She described that last winter two young boy came to the Fayetteville Free Library and offered their own design of the “Public Library of the Future.”  Doesn’t it sound awesome? To me it does.  In the maker space one can actually bring their own ideas or views of the world and give them life.  Students can take this opportunity and become scientists, or mathematicians or famous artists.  This will excite them to create something new and they will be more engaged in learning.  When students have the opportunity to come up with their own ideas I believe they will be more interested in learning.  Britton said in her blog,

Someone who wants to do something because it is fun is more likely to find an activity to be meaningful than someone who is doing something for a reward or to learn something. When someone is engaged in a playful space, that person will learn more easily. Creating playful information-based spaces allows the learner to explore and engage with content on the learner’s terms instead of on the instructor’s terms.

Therefore I believed that Maker Space is a great opportunity for students as well as young people in general to explore their creativity and become successful in their lives.  I also believe that the integration of the Maker Space into the curriculum will be an excellent idea because it will make education fun for the students.

Adam Savage one of the two Mythbusters did not exactly ask anyone to blow anything up, particularly schools (though he’s quite capable of creating explosions). He did however in his keynote address at the 2012 Maker Faire in San Francisco to re-examine education and find inspiration in the Maker Movement. He was invited to talk about how he believes the Maker Movement could influence the future direction of education. In particular he emphasized the connections to knowledge and people through making:

When you make something, the world becomes a little more parsable, it becomes a little more understandable to you. You become part of a conversation. And when you make things that you can’t not make, that conversation goes really deep, and you meet other people that are making the same things they can’t not make, and these people become your friends and your confidants, and your teachers and your mentors…

He also emphasized that it doesn’t matter what you make or why you make, just that you do. I thought this was particularly interesting because he and many other makers that tend to build things inspired by pop-culture (like a Star Trek tricorder and Ghostbusters proton packs). And these makers are often derided as being ‘unoriginal.’

To Savage this is BS, because of the point above, you are learning and discovering a community of tinkerers to engage. Savage talked about his making process which has had him vacillate between building things of his own and those infused by his love of pop culture. But it was the desire to have the things he saw in TV and film that first inspired him. He built his first cardboard space-ship so that he could be like Han Solo fly his own Millenium Falcon built into his parents closet.

At a certain point though he envisioned making a man, not something he’d seen in movies, but something he could picture perfectly in his mind. And he worked, and worked as a twelve-year old boy with the support of his family and created the “cardboard man” which stayed on his front porch until the elements had their way with his sculpture. Below was his next project, “sitting man”:

I’ve only recently discovered maker culture, but I’ve been making things for a long time now. I studied art in college, and graduate school, but before that I loved to create things with my childhood friend Chris Hall. He was an amazing model builder, fashioning a simple out-of-the-box model tank into this really cool diorama which included all his original modifications through air brushing and retooling. The plastic pieces would be distorted with heat and super-glue, and the final product was always better than the picture on the box, really. I benefited from getting to spend time in his basement building all sorts of things – fishing flies, popsicle stick forts, and more.

I now teach media at York College as part of our Communications Technology program, which has an inherent maker approach. Students learn to create all sorts of videos, design projects, and more through the program. But we’ve recently been inspired to create a makerspace and a maker course for our students so that we could get them into tinkering with tools. It’s brand new, but I’m most excited to learn to play with things like 3D printers, Arduinos, Makey Makey, and a Raspberry Pi. These new tools will likely bring me to new places in what I create, and hopefully I’ll be able to bring those experiences to my students. 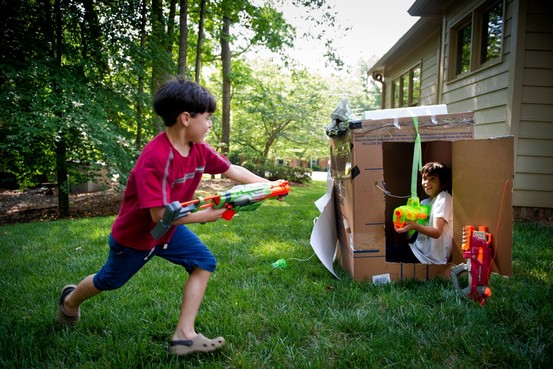 Growing interest in bringing the ideals of maker culture into education would help students grasp better understanding of the concept or lesson that is being taught to them. It would be beneficial for lots of reasons, students can learn on how to put their thoughts together and accomplish exactly what they are thinking of and or about. Creativity plays a major role, as where it gets one to think and use their knowledge and past experiences to develop they something they wish to create.

“Maker culture represents the desire of individuals to return to a lifestyle that includes a person making their own life tools and understanding how the machines that we depend on operate.”

The imagine above shows two brothers- Noah and Jacob playing with their water gun. On the side, we are able to see their cardboard made house. The two boys are very imaginative and are always looking to create something. Tina Budnits, their mother calls this idea – “Tinkering.” When Noah and Jacob work on their creation, they use everything but direction.

My name is Uzma Qasim. I am an undergrad student here at York College- CUNY pursuing my dream of becoming a teacher. I am majoring in Childhood Education w/ Psychology. I’ve wanted to become a teacher my whole life. At the age of five, my interest in teaching began. I always wanted to teach my peers how to draw, read and do math. As i matured, my passion for teaching became a lot stronger. I began working with children of all ages, teaching them how to be able to read and write became appealing to me because children’s are very impressionable, interested in learning and receptive to new concepts. I enjoy tutoring students and helping them build confidence in ability to achieve, both academically and socially.

I can imagine using these ideals in my K12 classroom to get my students excited about learning. Getting their imagination to actually come out to life would not only help them understand but also feel comfortable in having to express themselves.

“Remember everything that’s been created came from someone’s imagination.”

Hello everyone my name is Meir Galed and my major is Health Education (K-12).

Education as we know it is on the rise and is being fused with technology. It is starting from elementary levels and it is amazing how children are learning and using new ideas and coming up with new concepts. The ideas and concepts of creating something other than just sitting in a class in rows and facing the teacher with a bored face and showing no interest. One of these new concepts is technology and how children are incorporating technology with their education. Below is an image of people creating new things at the Maker Faire and they are in the young makers program and the faire shows many of their inventions. writing an essay in apa format

I want you to search for articles, blog posts, images, videos, etc. that talk about the growing interest in bringing the ideals of maker culture into education. Good terms ‘maker’, maker space, STEM and maker, K12.

You will create your first blog post and reflect on maker culture and introduce how you could imagine using some of these ideals in your K12 classroom. This means you should also introduce yourself and your future plans as a K12 teacher.

In this post, you will need to link to at least one article (website address) you are referencing and embed either a video or image(s) to illustrate your perspective as well.

Be sure to visit the about page to find Audrey Water’s article about Maker Culture in Education.